Why Join a Trade Union?

Everyone has the right to form and to join trade unions for the protection of his interests." - United Nations Universal Declaration of Human Rights Article 23.4 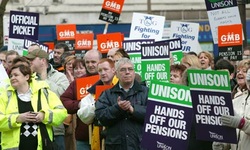 Trade unions help thousands of people at work every year with a wide range of different problems.

Examples of the some common issues in the workplace today include accidents at work, unfair discrimination in the workplace, pension schemes closing and manufacturing / service sector jobs being transferred to overseas locations.

Trade unions are organisations that represent workers. They aim to help members with

§ "Everyone has the right to form and to join trade unions for the protection of his interests." - United Nations Universal Declaration of Human Rights Article 23.4

§
Trade unions are imperative to ensure that workers achieve a living wage and decent working conditions. They offer the most effective and legitimate way to establish a fair deal for workers, by allowing them to stand together to defend their rights. This collaborative voice allows workers to express their views, which they may be too intimidated to do alone.

§
The International Labour Organisation states that the two central trade union rights, recognised as part of the minimum standards for workers rights, are freedom of association and collective bargaining. Freedom of association gives workers the right to form and and join representative organisations of their own choosing in the workplace. Collective bargaining is the right of workers to join trade unions without fear of discrimination, to have their union recognised as the representative of its members, and to have it negotiate the terms and conditions of their employment on their behalf. Trade unions offer a voice to marginalised and exploited people, helping them to improve their own rights.

§ When, in 2006, workers in a Cambodian clothing factory supplying Topshop and Next, (among others) tried to protest their low wages by forming a union and organising a strike, the factory began a major anti-union campaign. Some 19 union leaders and 120 union members were dismissed and replaced by new non-unionised workers, and 11 union activists were pursued into the courts. The man identified by the factory management as the leader during the strike, Mr Sok Vy, was singled out and prosecuted on charges of incitement and criminal damage, despite the fact that no evidence was presented against him at court and that witnesses claimed the strike had been entirely peaceful. This case was eventually resolved with the help of solidarity action by campaigners here in the UK: after the case appeared in a UK newspaper and some of the buyers put pressure on the factory management, the sacked workers were reinstated and allowed to form their union.

§ But this is just one example. The ICFTU estimates that in 2005, 115 trade unionists were murdered for defending workers' rights, while more than 1,600 were subjected to violent assaults and some 9,000 arrested. Nearly 10,000 workers were sacked for their trade union involvement, and almost 1,700 detained.